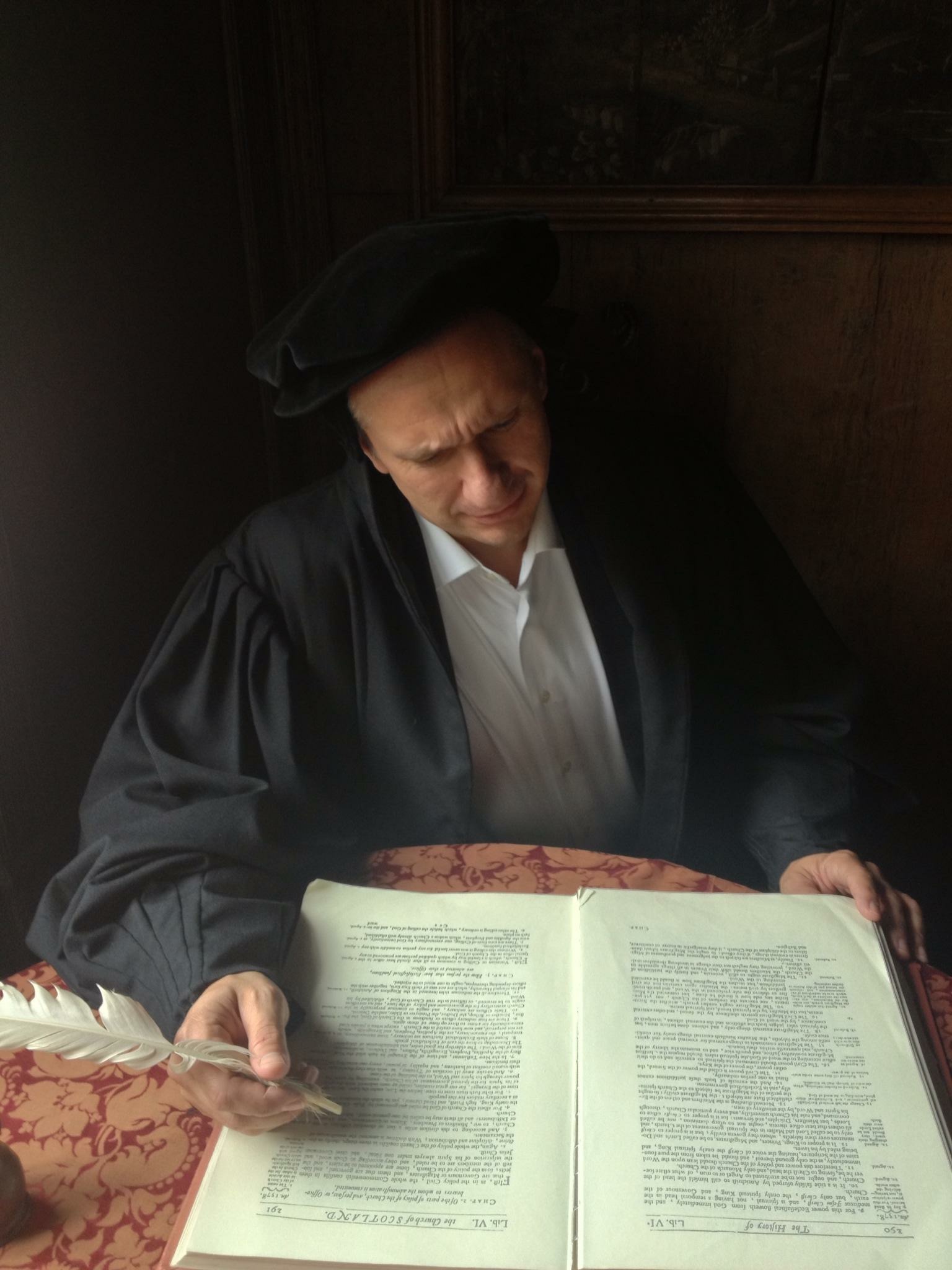 For liberation -- not less of love but expanding

Of love beyond desire, and so liberation

From the future as well as the past.

I grew up in Knoxville, Tennessee, not so far from King, and my student days took me to Chicago, Boston, and Scotland. I studied literature and philosophy at Wheaton College, then received the MDiv from Gordon-Conwell Theological Seminary, and finally the PhD from the University of Edinburgh. After six years in Scotland, I returned to teach for five years in Memphis, and came to King in 2004. I live here with my wife Heather and our children Kathleen and Peter.

My teaching ranges widely, but I am most at home when I'm talking about the history of Christianity (especially Medieval and Reformation), or the history of books, or the history of Scotland. Irrespective of subject matter, though, I aspire to offer my students (and myself) the chance to engage the inescapable questions of life along with persons from the past. Here we discover the brilliance of our forbears, and their flaws, and our own part in an ongoing, shared quest. Here faith and history meet, and the results can change us -- usually by complicating our questions.

Beyond my scholarly work, I am interested in writers of the early twentieth century who found in the past a vital and direct answer to the agonizing questions of their own day: G.K. Chesterton, T.S. Eliot, C.S. Lewis, and especially Charles Williams.

"A book for Lollards and Protestants: Murdoch Nisbet’s New Testament," in Crawford Gribben and David G. Mullan (eds), Literature and the Scottish Reformation (Ashgate, May 2009), pp. 233-246

Foreword to a reprint of D.P. Thompson, George Wishart: The Man who Roused Scotland (St Andrews, 2013)

2012 "The Man in the Leather Mask: Prophecy and Calvinism in Early Modern Scotland," The University of Evansville Spring History Lecture (Evansville, Indiana)

2011 "Setting Light in the Margins: English Bible Annotators Before the King James Version," The King James Bible and the World It Made 1611-2011 (Baylor University)

1995 "The Debate between Quentin Kennedy and John Davidson 1558-63: Understanding the authority of Church councils in the Scottish Reformation," Ecclesiastical History Society (Norwich, England)

My ongoing research, sporadic though it may be, goes in two directions. The first has to do with the practice of prophecy among the Scots, especially Presbyterians of the sixteenth and seventeenth centuries. This unique practice, at variance with most Reformed theology and practice, seems to have deep roots in Scots culture, and may have a trajectory that takes it to Appalachia. My second ongoing research interest is printed marginal notes in early modern English Bibles. From William Tyndale on, English translators and printers felt the need to help Bible readers understand the difficult parts. I have worked in particular on Miles Coverdale's annotations in the late 1530s, but hope to expand this effort.